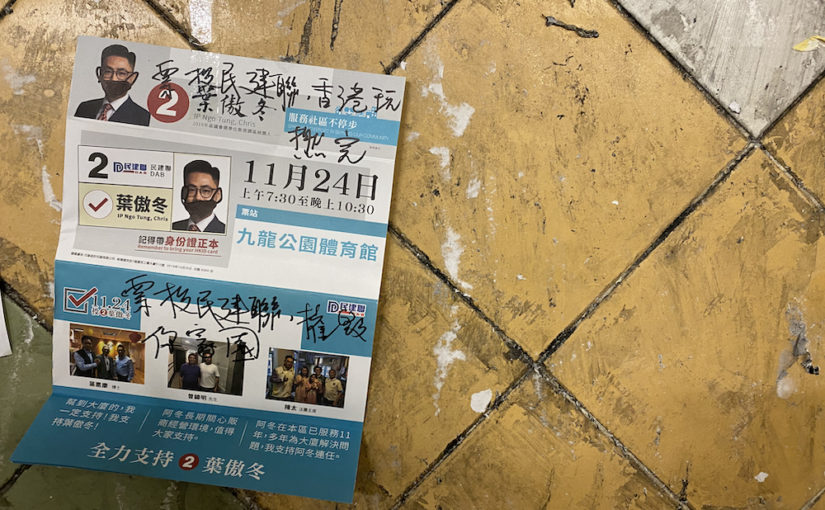 At face value, the District Council elections today will not change much about Hong Kong politics. The district councilors are local part-time politicians and do not have much political power, even though they have some collective say in the LegCo and Chief Executive elections. However, this year, the outcome of the District Council election may very well decide the future of the pro-democracy movement.

For the last two weeks, Hong Kong has seen unprecedented violent clashes between radical protesters, their critics, and the police. Universities across Hong Kong were transformed into battlegrounds, with a forced general strike paralyzed the city for several days. Further, a siege is still ongoing at Polytechnical University, whereby there are multiple protest sites across Kowloon, aiming to distract the police and divert attention away from PolyU. Many people have been critically injured. Indeed, one protester was shot in the chest at close range, and another one is still in a critical condition after being hit by a tear gas canister. A critic of the movement was set ablaze by radical protesters, and a bystander died after he was hit by a brick when residents tried to clear a roadblock. The escalation of violence is not new, but it has been increasing with greater voracity over the last few months.

Nonetheless, public opinion does not seem to have shifted against the movement in October. The vast majority of Hong Kongers remained supportive of the movement and viewed the police and government as being responsible for escalating violence. However, the past two weeks might have changed public perception.

Today’s election is almost entirely about the ongoing protest movement. Pan-democrats on all political levels have supported the movement from the outset and, as a lesson from the Umbrella Movement, have refrained from publicly condemning their radical elements. Hence, every vote for a pro-democratic candidate will be perceived as a vote for the movement.

Therefore, today’s District Council election is an important litmus test for the movement’s public support. In fact, if the pro-democracy camp does not win a majority of the 452 contested seats, it might be the movement’s demise. Why?

First of all, the election outcome will either galvanize or dampen down social mobilization, especially that of moderates. Protests suffer from various collective action problems, especially when they entail high personal risks, as it is the case in Hong Kong today. To overcome these problems, it is important, especially for moderates, to believe that a sufficiently large number of people support the protest (and turn out). To make such a judgment, people use all sorts of heuristics, cues, and sources of information prior to a protest. Here, the election result will provide an important informational resource for future protest participation, particularly for those who would not go as far as to risk their life for Hong Kong.

Secondly, the election result will receive much attention from international observers. If Democrats win by a landslide, the international community will continue backing the movement despite its recent violent escapade. If the pan-democrats do not win, the images of burning police cars and bows and arrows will have a lasting negative impact on the movement’s reputation as a predominantly peaceful and democratic campaign.

Thirdly, if pro-establishment candidates were to win a majority of seats, it is likely the SAR and central government will use the results to justify an even harsher crackdown on pro-democratic voices in the city and increase state repression (“to re-establish law and order”) in the near future.

If there is still large support for the movement, the election victory for the democratic camp should be safe, right?

Unfortunately, this election is not a fair game for democrats. Firstly, there is evidence of voter suppression and potentially fraudulent candidates that may benefit pro-establishment candidates. In terms of voter suppression, police (originally, the media reported ‘riot’ police) are stationed at all polling stations. Imagine you have participated in an unauthorized protest and escaped arrest. How comfortable would you be with voting when you know that (riot) police are around? Additionally, there have been reports that some ‘pro-democratic’ third-party candidates are fake. Apparently, their only purpose is to steal votes from pro-democratic candidates.

Secondly, in autocracies, where the integrity of elections is not necessarily safeguarded (or people do not trust the elections), people falsify their real preferences and vote for the incumbent because they fear their vote might not be anonymous, and personal repercussions loom from voting according to their real preferences. In Hong Kong, trust in its fundamental institutions such as the government, the police, or the rule of law, has been eroded over the last five months. It would not be surprising if many voters had lost trust in the integrity of elections too, and feared suffering negative consequences if they did not vote in favor of the establishment.

It remains to be seen how all these factors play out and how the election results will feed into the public discourse. What is certain, however, is that this election will have important implications far beyond the district level.